(Well, I hear my boss say things all the time.)

My boss put a letter on my colleague’s desk today and spoke about The Economist. Then the letter lay there asking me to read it. 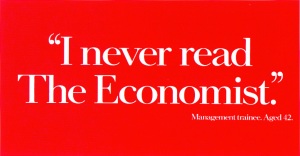 Because Royal Mail is on going on strike, some subscribers (the publisher of my company included) may not be able to get a copy of The Economist on time this week. The Economist sent letters to subscribers stating that if they did not receive a copy due to industrial action, then readers would receive a complimentary two week subscription to cover the cost of buying an issue from a shop or newsstand.

This seems to be a little more than The Economist needs to do seeing as how the failure of the issue to arrive to subscribers isn’t the fault of the magazine, but the mail service. And, these subscribers would be able to see the content online. And, it probably cost alot to send out letters (postage and color printing wise) to subscribers stating that they probably wouldn’t be receiving a copy of the magazine when an email probably would’ve done just fine.

Industry blog talking about all things advertising and more written from Detroit, the heart of the Mitten state.

Topics include whether or not Dan Gilbert is trying to transform this town into some sort of new personal metropolis, and if those horses in the Dittrich Fur commercials are dead yet.